I am so excited to be able to officially announce that I will be a member of the Clif Pro Team in 2019!!

I started with the Clif Pro Team 6 years ago as a triathlete. I was signed to the team shortly after winning my first amateur XTERRA World Champion title at the young age of 16. I competed for the Clif Pro Team (then the LUNA Pro Team) as a triathlete for 3 years before the team made a change. The team shifted away from triathlon in order to focus exclusively on cycling. As such a young athlete, I was given the option to remain with the team and shift my focus as well. I think I only half knew that that decision would change my life.

Fast forward a couple of years and I am a full-blown professional cyclist. Not only have my priorities changed, but my body has morphed from broad swimmer’s shoulders to the physique of a cyclist. Now, the Clif Pro Team is changing again and I am moving with them. The sport of cycling has evolved with new and exciting disciplines and the Clif Pro Team looks to move with the times as we tackle a new North American event schedule and open the once all-female team to be a more inclusive roster featuring the first two men in Clif Pro Team history.

As I enter my 7th season with the Clif Pro Team I count my blessings that I have a team that has always had my best interests in mind. I started competing at 9 and after this season I will have been on the Clif Pro Team for half of my racing career, my entire cycling career, and my entire professional career. I am so thankful for the opportunities that this team has afforded me as they invested in my future when I was starting my first pro races in the back and I can’t wait to reach the top with them as the team turns over a new leaf!

So why make this announcement now, with over 3 months left in the year? Because this last week was InterBike and Clif Bar’s representation there was spectacular. InterBike is North America’s largest industry bike show, which conveniently coincides with a C1 cyclocross race.

Cross Reno is largely about the spectacle. With the largest industry bike show going on in the same city, the course is lined with spectators and the party begins for most people before the race is even over.

As I began to warm up for the race, I considered the fact that that last event I competed in was nearly 8 hours long, and this event would be less than 50 minutes. While to some people that makes this event seem like a piece of cake, any experienced rider will understand the complete opposite physiological toll it will take on my body. This season I competed in events ranging from 25 minutes to 8 hours and really tested what my body was capable of and how well I could ‘cross’-over.

When the gun went off at 7:25 pm we sprinted down the lit start-finish shoot and disappeared onto the dim course. We turned a few corners and quickly hit the barriers. I had a great start and was sitting in a nice position. In contrast to the night sky, photographers flashed their cameras as we jumped over the barriers. My teammate tripped in front of me and we were all dodging chaos. As we entered the sandpit and put our bikes on our shoulders to run, I was hit in the face with the wheels in front of me as I tried to get around the riders who were allowing gaps to form between packs. In the windy Reno evening it was difficult to race alone. The groups of riders formed quickly and after pulling my group around for a while trying to bridge the gap, I played the smart card and sat in my group. Little did I know that a few laps later my tummy would cause me so much pain that staying in that group took everything I had. This upset tummy would last all the way into the night. I stayed strong, held my own, and honestly played a little bit of damage control of my first cross race of this season. I finished 14th. Let’s call it an opener. I’m looking forward to the next races coming up.

After the race, and my cool down, the party at the Clif Bar tent was already in full swing and as I rolled my bike through the tent with teammates, employees, and even the founder of Clif Bar all having a grand time together, I paused. Clif Bar was “Born on a Bike” but it’s certainly the incredible people who have made it thrive. 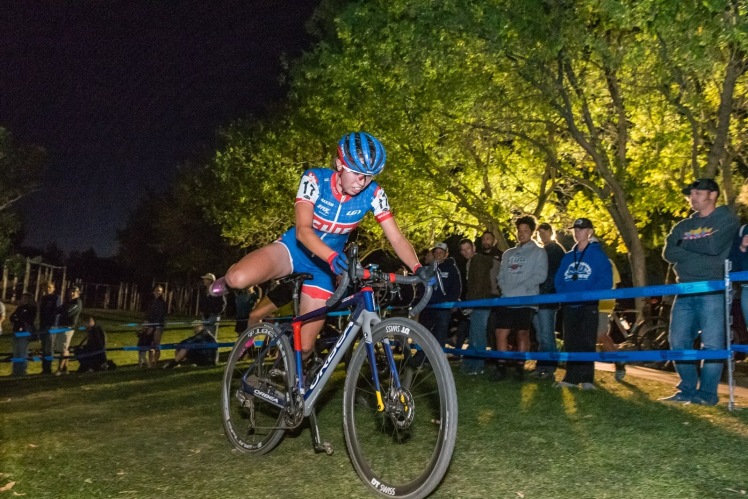 Up Next: Oz Trails Epic Rides in Bentonville Arkansas October 5-7