On Friday night the town of Grand Junction shuts down Main street and puts on a show. Spectators, sponsors, athletes, children, cyclists, and anyone curious about all of the commotion line the race course cheering, heckling, and taking notes during the fat tire criterium race.

The Fat Tire Crit is a pros only event so it’s the perfect opportunity to gather the community to inspire and start off the weekend with some serious action.

I’ve noticed recently that what you see is all about perspective. On Friday as I zipped up my skinsuit, filled my bottles, and tied my hair up in my helmet, I asked myself, “Who do you want to be tonight?” A lot of answers danced around in my head but one held stronger than the rest: “The best version of myself.” It seems vague, but in a sport where you can wear many hats sometimes it’s refreshing to give yourself permission to just aim to be you.

I rolled to the start line and lined up behind my amazing teammate, the 5-time Olympian Katerina Nash. When the gun went off it was a mass start and an all out sprint to corner after corner in the race. The course featured 6 corners in just 0.6 miles and made for a drag race.

The first few laps I was dangling around 15th place. I didn’t like where I was, I was all strung out, and then a switched flipped in my mind. “I can change this.” I maneuvered through the pack and went straight to the front of the group. Now I was ready to race.

Lap after lap I stayed in a good position, but about half way through they called for a prime. That means that whoever was first on the next lap would win a money prize. 3 riders went for the money. I reacted a little too late and decided to not race for the prime. However, when those 3 riders went through the finish, instead of regrouping with the main group which was just a few seconds back, they attacked again and continued charging.

I felt strong and immediately went to close the gap. I had it in my legs. As I sprinted forward I saw the gap shrinking between me and the group ahead. I was confident I could catch them. Then I looked back. The entire field was drafting my wheel. My teammate was in the break, I had to make the right call for my team and I sat up.

**For those that don’t know team tactics. If your teammate is in a break (in a group ahead of the main pack) then you should never ever pull the group back up to your teammate. For example, in this case, my teammate was in a break of 3 and therefore would only have to outsprint 2 other women. If I had pulled the main group up to her then she would have had to outsprint about 15 other women.**

Once making the best decision for my team, I sat in the group and assessed the new situation. I stayed 2nd wheel in my group for the remainder of the race. I responded to every attack and my legs felt strong. 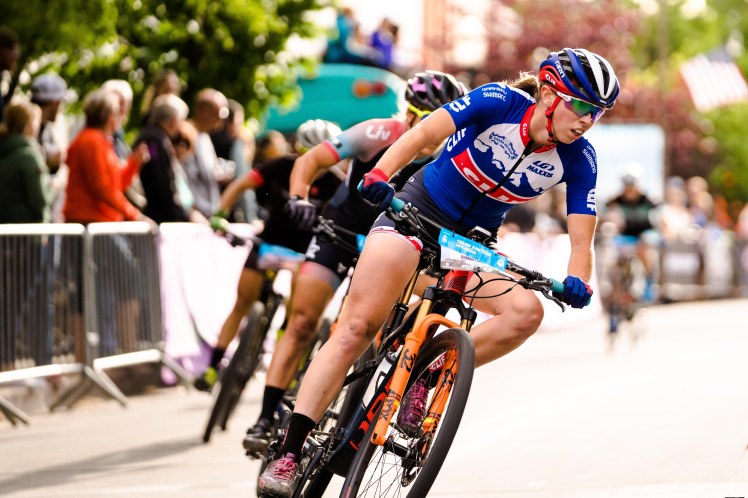 As we rounded the corner for the final lap, someone bobbled and I reacted thus causing me to fall back to 5th or 6th wheel. I felt a twinge of panic. Had I come this far to have it taken from me? I surged ahead, trying to make passes every chance I had. The time for the ultimate test was coming. 2 corners to go and we were one huge group. It all came down to the line and I finished in 6th! That is my best result yet in one of these races!

I think the best part of the crit was staying true to my initial goal- being the best version of myself. I made smart decisions, I did what was best for my team, I completely believed in myself and in the sprint I didn’t sell myself short. A career best result was a nice reward.

Sunday morning brought cool temperatures to the Grand Junction start line. All of the racers spun easy circles around the streets, waking their body up in the early morning hours, but saving every match for the long and brutal course that lay ahead.

The group of professional women paraded out of town with a motorcycle escort and took to the trails. As we rolled off of the line it was all smiles, each of us trying to channel nervous energy, but every minute that we got closer to the trails, the pack became quieter and quieter until all you could hear were strained breaths and the clicks of shifters.

When we hit the trails the group quickly became a single file line and I was hanging on toward the end of the front group. We hit the first few punchy climbs. These were sections that I had marked before the race as places that I would struggle. Instead, I passed a few people there. I guess the extra focus helped.

As we neared the entrance of the first single track there was a group of 5 ahead, a few seconds, one other girl, a few seconds and then me and a few others. I kept telling myself, “You’re right with the group. It’s only a few seconds, you’ll catch right back on.” Famous last words. I’m beginning to learn that the race never comes back. It’s amazing how someone being just 5 seconds ahead can be chasm seemingly impossible to jump across.

The technical singletrack climb featured big rock ledges forcing you to lift your front wheel high off the ground and then set it gingerly a top the rock. Quick turns, razor sharp rocks, and rocks that dropped off mysteriously to the other side leaving you holding your breath just trusting that you would touch down wheels first all left us battling to ride as smooth as possible while still working as hard as possible.

Every mistake, every time you had to unclip a foot to kick off of the rock, every time I would tumble to the side and catch myself with my hand, any time you should stall out over a rock and smash your body moving with forward momentum on your bike which had come to halt- all of those things were not measured in my mind as pain or frustration but as seconds lost, one here or three there. 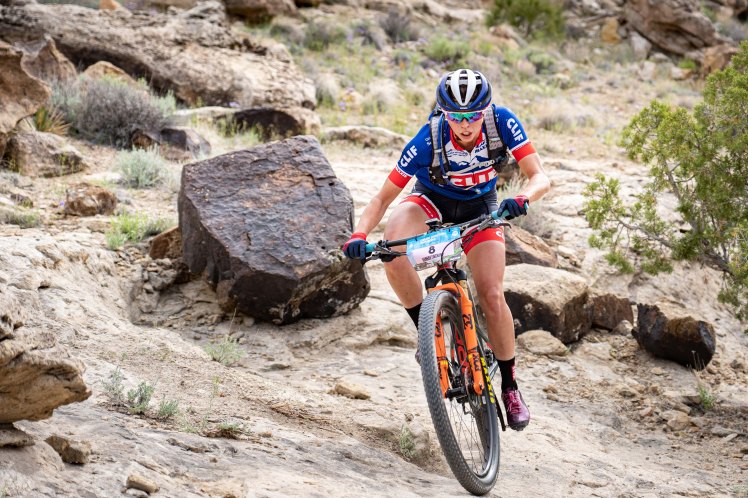 I rode the sections well, but others rode it better. I left the first uphill singletrack section in 8th place and could just barely see a few dots ahead on the straight up climb. I was battling back pain, but everyone is battling something out there. I countered all of exhaustion with Clif gels and took my eyes off of my Garmin that told me I was only 2 hours into a 4 hour race.

After nearly an hour of climbing alone and eventually having to tell myself that those dots had to have just rounded the next corner, the sandy climb gave way to the slick rock climb. After hours of seeing no one on course the slick rock greets you as a reminder that you’re headed back to civilization. Your wheels find traction on this huge boulder and slowly you start to see people cheering again.

Then comes the final descent- almost 45 minutes nearly all downhill on rough and technical terrain just hoping to catch you off guard one more time. Maybe it was the feed station and that last bottle of drink mix my team handed me, but I felt amazing on that final descent.

Despite my back screaming, my arms shaking, and my calf threatening to cramp at any moment I found some smiles on that final descent down. I always managed to take a deep breath and focus right before the most dangerous obstacles emerged. When I came into downtown to be welcomed into the finish line I was grinning.

It was a hard solo effort out on the course, but an 8th place finish was a great reward for the continued grind and all of the mental battles of telling myself that someone was just ahead or just behind. I’m always happy as long as I’m improving and 8th was another step in the right direction. I’m getting hungrier though. The closer I get, the more I want a taste of the podium. The best has yet to come. 😉

Up Next: Missoula Stage Race June 6-9